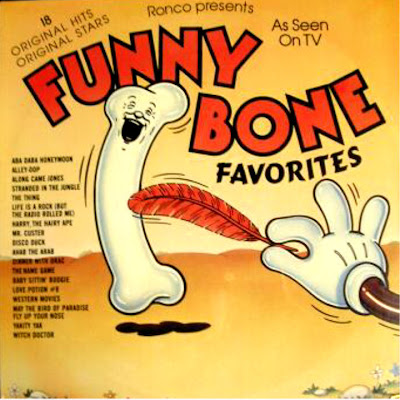 There have been many novelty song compilations produced over the years (many by K-Tel) with names like "Goofy Greats" or "Silly Songs". But, this is the one I had as a child. It was released by Ronco in 1978 and features some songs that were on all of those other records and some that you don't see that often. I don't have the ability to rip records to mp3's so I gathered these songs from other sources. Some I already had in my CD collection, a couple of them were downloaded online and a bunch of them came from CD's I checked out of the library. The back of the album has this ad for Mr. Microphone-- 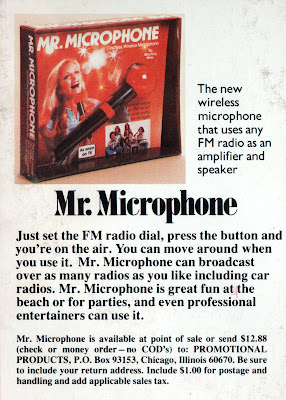 Email ThisBlogThis!Share to TwitterShare to FacebookShare to Pinterest
Labels: mp3

Thanks again, terrif blog and a fabulous and informative trip down memory lane!
I'm a huge fan of old horror classics and music so I couldnt ask for much more!

All my best
Alex

Thanks Alex. I'm glad that you enjoy my blog.

Wow, I remember listening to that 8-track with the big ol' clunky head phones when I was a kid. That brought back some memories!

Dude... my sister and I were huge fans of the Funny Bone Favorites album when we were kids. Last week I searched on the net for a copy, bought one for 10 bucks from some record shop in Portland, Oregon. This weekend I bought a USB turntable, ripped the songs, and then returned the player. I wish I would've seen your blog sooner! It's neat that someone else had even heard of this album. :) Now my kids are enjoying it. Happy New Year!

WOW my Uncle had this album on an a-track and loved it as a kid....almost forgot all about it but found this and downloaded each song......remembering them word for word....thanks

I had this one too, it was an LP and I probably wore out the grooves as a kid. Another one I used to listen to a lot was one that had the old 'TV Batman' theme song on it "Atomic batteries to charge!", but I can't remember what the rest of the album had on it.

CAN SOMEONE PLEASE TELL ME HOW I CAN GET THE FUNNY BONE FAVORITES SONGS TO A CD FORM? I HAVE BEEN LOOKING FOR THIS LP FOR A LONG TIME NOW AND I HAVE FINALLY FOUND IT, IF SOMEONE CAN HELP ME PLEASE EMAIL ME AT OHIOGIRL825@AOL.COM THANKS MONA

I have been looking for this album or at least the playlist for the past five years! My sister and I used to love this album as children. Actually we had the 8 track! LOL Now that my sister and I both have children, I thought it would be a great gift for our children . . . or maybe us? LOL Thank you so much!

Thanks for the playlist - a number of the songs are on iTunes (for a fee) - so I had already started buying a bunch of them there (searching by name/artist). Thank you for helping with that - I still know exactly where the record is at my parent's house.

Another one I had searched and searched for was Dickey the Duck - it was the flip side of the Rubber Duckie 45. Surprisingly, it was my mom that got that one ripped for me (and my 2.5 year old LOVES it!)!

Thanks and have a great day!
Ally

Is anyone having trouble getting to the download page for the funny bone record download? Is the link dead? Thanks!

It seems that there is a problem with Rapidshare. Hopefully it's temporary and the links will be back soon.

Erick, thanks for correcting me on my Ronco album post. I would have given you credit if I remembered where I got these funny bone files - I started getting this collection ready back this summer so I just had stuff on my drive that I didn't know from where anymore. I also believe I did in fact just use your audio for the funny bones ones - I looked at my albums today and they do seem pretty scratched up (probably from being stuck together in the same cover.) I remember editing the audio on them but I probably ultimately decided yours sounded better and went with them, I hope you don't mind. I edited my post and gave you credit for the funny bones.

THANK YOU SO VERY MUCH!!! I have been searching for this album for more than a year. Had it when I was growing up and loved it, but lost it in the house fire. I could remember all of the songs, but I could never find the name of the album. Now, thanks to you, I can share it with my kids. It's a cultural experience after all! Thanks much for the dl, too!

Dude, I loved this album! My kid brother and I memorized the whole thing (skipping a song or two we didn't care for) and lip-sang every one of them for hours and hours. One of the best presents we ever got.

I looked for this album online a year or two ago and found nothing. Now I have the whole thing again!! Thanks! I have to go now and get my brother a copy.

My mom had this when I was a kid (80s) and I think the record warped from playing it so damn much... never dawned upon me until recently to look for it. "Bird Of Paradise" and "The Thing" were definitely favorites. Thanks!

This was one of the first records I ever owned. This, and the Close Encounters soundtrack.

Hello, thank you so much for posting this. I've been looking everywhere for it. I did find an old record copy off Ebay but now I have the digital version. Thanks!

I was able to procure a copy on 8track about 10 years ago. I still like to give it a listen every once in awhile. Good stuff!

Thanks for uploading this.
I used to listen to this (in 8-track form) all the time when I was 4-7 years old.

Glad to see and hear a bit of my childhood again.

I had this album as a kid & thought it was the greatest! Thanks so much for posting the track list & all the info. I was telling a friend of mine about it the other day but I couldn't think of the name of the album. I could only remember Ahab the Arab, Along Came Jones, Life Is A Rock, The Name Game, Love Potion #9, and Yakity Yak. Now that I see it, I remember a lot more of them. I spent hours listening to this album. I couldn't have been older than 6 yrs old. I was born in '73 & this came out in '78, so I could've still been 5 yrs old. Nevertheless, I enjoyed the heck out of it.

Any chance of getting this re-upped? I NEED it lol.

Hello, is there Any chance of getting this re-upped? It sounds like a fun album so does the Funny Bone II Album. Many Thanks Stan