Christmas In The Stars 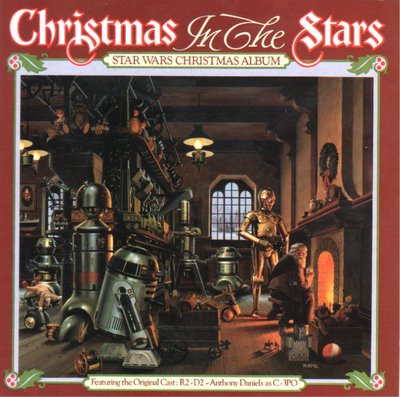 Here's the classic (?) Christmas In The Stars: STAR WARS Christmas Album. My neighbor had this on vinyl when it came out in 1980. This rip is from the 1996 CD release from Rhino. This album was produced by Meco Monardo, best known for his disco album Star Wars And Other Galactic Funk. It features the voice of Anthony Daniels as C-3PO and sound effects wizard Ben Burtt provides the sounds for R2-D2 and Chewbacca. The strangest thing about this album is that it features an 18-year-old Jon Bon Jovi (credited as John Bongiovi) fronting a high school choir on the song "R2-D2 We Wish You A Merry Christmas." Be warned -- this album is pretty cheesy.

Christmas In The Stars: STAR WARS Christmas Album
Posted by Erick at 9:58 PM

hey Erick..thats for the info but its seems there is a prob with my comp..the download is not happening..is there any other way i can get hold of it??

Can you please re-up this. I tried to download it and it said it was unavailable. I heard this is a 'classic' and would love to play it for my kids during the holidays.

Yes, I'm a huge Star Wars fan, lol, and these campy delights remind me of when I was young Landspeeder mechanic at Toshi Station!

Please send me an update, scott_spray@hotmail.com

BTW, this site is a mirror image of my 70's soul. We could easily be friends or brothers, seperated at birth of course.

I had this album on LP way back in the day and have been searching for a few years to get either the CD or mp3's to add to my Christmas music collection without spending $75+ for it. (I don't mind paying, but it shouldn't cost me an arm or a leg.)
THANK YOU!!!

Downloading this. Thanks so much. :)

That LP is probably still in my parents' front room closet. I should go fish it out.

Thanks, my wife and her brother are huge Star Wars fans, and with the holidays coming up, you just made a great Christmas gift even better. So thanks from all of us in California.

Thanks! This is great to find again. I've no idea what I did with my previous copy.

Wow, thank you so much for making this available! My sister had this on cassette when I was younger and I could never decide if it was an offense against God or just hilariously awesome. I am so excited to hear it again!

I went looking for this album when my brother-in-law told me that the singer on track 5 in Jon Bon Jovi. He was working as a janitor at the Power Station recording studio where the album was recorded and they needed a male vocalist. Kinda funny...

Thanks for the rip.

The Lord loveth a cheerful giver. He also accepteth from a grouch nice post and thanks for sharing...

You absolutely made my day! I have tried to find this album for years. So many memories listening to this as a kid. Thanks again!

i have the record single from this album. 'what can you get a wookiee for christmas (when he already owns a comb) and b side 'r2d2 we wish you a merry christmas'. does anyone have any idea how much its worth?

Wow! Thank you so much for making this available. Yes I am a huge fan of Star Wars and I was searching for this album from a long time. At last my search ends on your site. I am very happy!

This cd is so ridiculous and yet amazing at the same time. I'm a 21 year old Star Wars fan, and I'm so glad I was finally able to find this! Thanks!

Good Article, pusat souvenir di jakarta. thanks for your article. :)

Good Article, shika-lirik-nasyid.blogspot.com. thanks for your article. :)

Nice article, I just want thanks because your blog is informative.