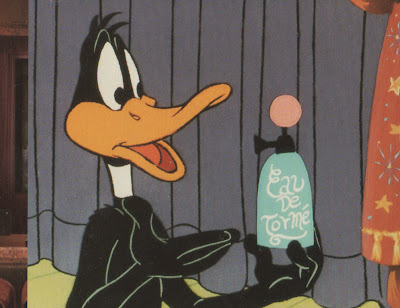 It took me awhile to track down this song, but I finally found it. I know a couple of other bloggers are looking for it also (Greg at Soundtrack Rarities and Stephen). I actually had to go to the library in the next county over from where I live and sign up for a library card to check out this CD. It's called Mel Tormé At The Movies, released in 1999 from Rhino. This is a CD rip at 320k.

Here's what the liner notes have to say about this song:

Night Of The Living Duck (1988) was (along with the previous year's The Duxorcist) one of the first new theatrical short cartoons featuring the classic Warner Bros. characters that had been made in three decades. To supplement the ailing voice of longtime Looney Tunesman Mel Blanc (who died the following year), writer/codirector and first-time songwriter Greg Ford turned to another Mel, namely Tormé. In a plotline witty and irreverent enough to compare with the great Daffy vehicles of the '40s, here the duck is a nightclub tummler forced to entertain famous monsters of filmland--if he "dies" in front of this gruesome crowd, it's not mere showbiz parlance. Fortunately, Daffy atomizes his throat with a spray called Eau de Tormé, which endows him with the voice of the Velvet Fog. Equally lucky for the little black duck, lyricist Greg Ford and composer Virg Czurinko also supply him with a delightful ditty, "Monsters Lead Such Interesting Lives," inspired by a line uttered by Bugs Bunny in the 1946 cartoon Hair-Raising Hare. Mel said at the time, "It's a joy beyond my fondest dreams to hear my voice coming out of Daffy Duck's bill."

Hey guy...
I was remembering you were looking for spooky Christmas music back in December and I think I found something you could be interested in. Drop me a line at kentramone@yahoo.com if you have time.
-Kent

Thanks for this, Erick!

Erick, thanks for your detective work and for sharing this song. It's interesting to hear the difference between the one shared recently and this one. I'm not sure which one I like better! Thanks again for keeping an eye out for this.

Your welcome. I'm glad you liked it.