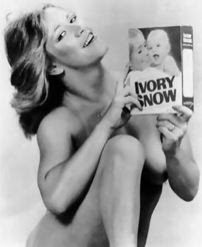 LOS ANGELES (AP) — A friend of adult film star Marilyn Chambers says the actress has been found dead at her home in northern Los Angeles County.

Peggy McGinn says the 56-year-old Chambers was found by her 17-year-old daughter Sunday night and the cause of death has not been determined.

Chambers starred in the 1972 film "Behind the Green Door," which was more widely distributed and attracted a more mainstream audience than the usual adult fare.

she was beautiful when she was young.

Wow, HOW did I miss this?! I always get way too upset when celebrities die, but it's sadder when they're young... and the older I get, the more I realize that 50-something isn't really that old. Thanks for the heads-up, Erick, and rest in peace, Ms. Chambers.