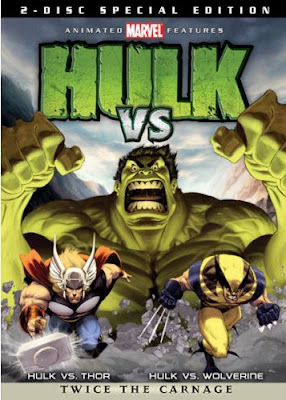 Are you ready for twice the action, twice the carnage and double the smash, True Believers?!

Coming January 27, 2009, Hulk takes on Wolverine and Thor in the most highly anticipated Marvel animated feature yet—"Hulk Vs!"

"HULK VS. WOLVERINE" SYNOPSIS The Incredible Hulk has been tearing a line across the Canadian wilderness, leaving a swath of destruction in his wake. He has to be stopped, and there's only one man up to the job. He's the best at what he does, but what he does isn't very nice. He's Wolverine, an elite agent of Canada's top secret Department H, and he's been put on Hulk's trail with a single objective: stop the green goliath…at all costs. Hulk and Wolverine are about to enter the fiercest battle of their lives.

"HULK VS. THOR" SYNOPSIS It's gods versus monsters in this epic forty-five minute movie. For ages, Loki the trickster has sought a way to bring defeat to his accursed stepbrother, Thor. But for all the battles Thor has fought, in all the nine realms, only one creature has ever been able to match his strength—a mortal beast of Midgard known as The Incredible Hulk. Now, with Odin the king of the gods deep in a regenerative sleep, and the forces protecting Asgard at their weakest, Loki is finally ready to spring his trap. In a classic battle that will test a hero's limits more than ever before, only the mighty Thor can hope to prevail.

I can't wait to see this DVD. Check out these awesome trailers --


It is available for preorder from Amazon --