An Evening With George Takei 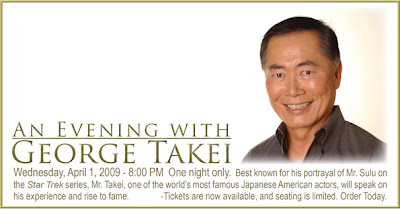 CANTON, OH - The Players Guild Theatre will present "An Evening with George Takei" on Wednesday, April 1, 2009 begining at 8:00 p.m. as part of the KIMONO events surrounding the Canton Museum of Art's blockbuster exhibit, "KIMONO as Art, the Landscapes of Itchiku Kubota."

"An Evening with George Takei" will focus on Mr. Takei's experience as one of the most famous Japanese American actors in the world. As a guest speaker, Mr. Takei will take the audience on a journey through his life. Starting with his childhood experience of being placed in a United States internment camp at the outbreak of World War II, Mr. Takei will share his rise to fame through his successful theatre, television and film career.

Best known for his portrayal of Mr. Sulu in the Star Trek series, Takei is currently a recurring guest star on NBC's Heroes and he can be seen in the newly released film, The Great Buck Howard starring John Malkovich. Takei's film and movie career includes six Star Trek motion pictures, Disney's Mulan and Mulan II, Trekkies, Return from the River Kwai and many more. Takei earned a Grammy nomination (1987) in the Best Spoken Word or Non-Musical Recording category, a star on Hollywood Boulevard's Walk of Fame, and the Order of the Rising Sun from the Government of Japan.

This event is being sponsored in part by these generous supporters: Arts In Stark, and the Canton Repository.

I recently came accross your blog and have been reading along. I thought I would leave my first comment. I dont know what to say except that I have enjoyed reading. Nice blog. I will keep visiting this blog very often.