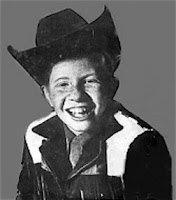 SANTA MONICA, Calif. (AP) - Jimmy Boyd, the child singer and actor best known for the original rendition of the Christmas novelty hit "I Saw Mommy Kissing Santa Claus" in 1952, has died. He was 70.

"I Saw Mommy" shot to the top of the Billboard charts three weeks after it was released. It sold 2 million records in less than 10 weeks. It has since been interpreted by such artists as the Jackson 5, John Mellencamp and Amy Winehouse.

Boyd, who was 13 when he recorded the song, told Time magazine soon after its release that he was surprised by its success.

"I like it personally," he said, "but I didn't think anyone would buy it."

Boyd was born in McComb, Miss., on Jan. 9, 1939, and grew up on a ranch near Los Angeles' San Fernando Valley, where be started playing guitar at age 4. After winning a TV talent contest, Boyd appeared on "The Frank Sinatra Show" and was signed to a recording contract with Columbia.

His first recording success was with a country song, "(The Angels Are Lighting) God's Little Candles." Later hits included "Dennis the Menace," sung with Rosemary Clooney, and several duets with Frankie Laine.

His TV work included appearances on "The Ed Sullivan Show" in the early 1950s and roles in the situation comedies "Bachelor Father" from 1958 to 1961 and "Date with the Angels" in the late-1950s.

In 1960, Boyd married Yvonne Craig, an actress he met while making the Bing Crosby film "High Time" who would go on to play Batgirl in the 1960s TV series "Batman." Their marriage ended after two years.

In his later years, Boyd became an avid sailor and for years lived on the Southern California coast on a sailboat he named Unplugged.

He is survived by a son.

I had no idea he married Yvonne Craig... fascinating. Lucky guy.

Sorry to hear of his passing. R.I.P.

It’s so nice site. We love to see more on this site. Keep on updating… MonkAreYou Bali *fjhghgh