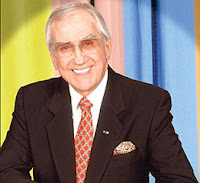 Ed McMahon, the longtime pitchman and Johnny Carson sidekick whose "Heeeeeeerre's Johnny!" became a part of the vernacular, has died.

McMahon, 86, was hospitalized in February with pneumonia and other medical problems.

He had suffered a number of health problems in recent years, including a neck injury caused by a 2007 fall. In 2002, he sued various insurance companies and contractors over mold in his house and later collected a $7 million settlement.

Though he later hosted a variety of shows -- including "Star Search" and "TV's Bloopers and Practical Jokes," McMahon's biggest fame came alongside Carson on "The Tonight Show," which Carson hosted from 1962 to 1992. The two met not long after Carson began hosting the game show "Who Do You Trust?" in 1957.

Read the full story here.
Posted by Erick at 5:41 PM