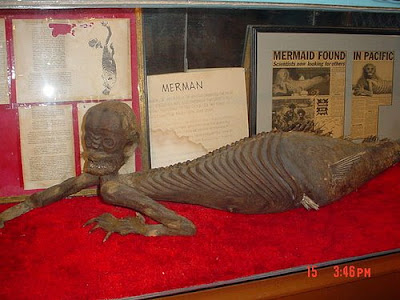 I discovered this creature at the Arkansas Alligator Farm a few years ago while on vacation. The Merman or Feejee Mermaid (also spelled Fiji or Fejee).

The Merman has been a resident of this gator farm for fifty years. The owner has fought off repeated offers of cash by entertainment franchises like Ripley's. They don't want the farm -- just the Merman, who is at least 95 years old.

We've noted on visits over the last ten years this place has become more inert, like a gator baking senseless in the humid, hundred degree Arkansas air. The Merman is displayed indoors, in a glass-sided box among a sprinkling of mounted deer heads and stuffed sea turtles. A lone squirrel monkey bathes in an orange heat lamp, scampering up and back on a tree limb. He is the only living thing in this room of empty cages and pits.

AAF used to sell spun glass mermen, but not anymore. It's always worth a stop, though, along with its neighbors, Educated Animals and Tiny Town.

Where Did the Merman Come From?
The first "merman" known in America was purchased from Japanese sailors in 1822 (mermen were apparently "ritualistic objects" of Japanese and Indonesian origin). P.T. Barnum purchased his first merman in 1842 and put it on exhibit as the "Feejee Mermaid." It was an immediate sensation. Other mermen quickly emigrated to America.

Read a great history of the Feejee Mermaid at the Museum of Hoaxes.
Posted by Erick at 1:00 AM

Email ThisBlogThis!Share to TwitterShare to FacebookShare to Pinterest
Labels: halloween

Erick, you gotta love that Fji Mermaid. One of the weirdest things ever. I wonder what the mermaid is up to these days... posting soundtracks... perhaps.

I was just reading an article about Homer Tate and thought about this Merman I saw at an Arkansas Alligator farm when I was a kid in the 1970s. I guess this would be it. Thanks for posting. Fond memories.