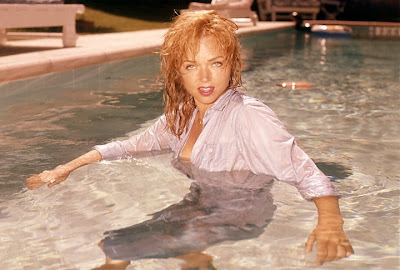 This is really sad. Rest in peace Yvette.

Yvette Vickers, an early Playboy playmate whose credits as a B-movie actress included such cult films as “Attack of the 50-Foot Woman

” and “Attack of the Giant Leeches

,” was found dead last week at her Benedict Canyon home. Her body appears to have gone undiscovered for months, police said.

Vickers, 82, had not been seen for a long time. A neighbor discovered her body in an upstairs room of her Westwanda Drive home on April 27. Its mummified state suggests she could have been dead for close to a year, police said.

The official cause of death will by determined by the Los Angeles county coroner's office, but police said they saw no sign of foul play.

Vickers had lived in the 1920s-era stone and wood home for decades, and it served as the background for some of her famous modeling pictures. But over time it had become dilapidated, exposed in some places to the elements.

Susan Savage, an actress, went to check on Vickers after noticing old letters and cobwebs in her elderly neighbor's mailbox.

"The letters seemed untouched and were starting to yellow," Savage said. "I just had a bad feeling."

After pushing open a barricaded front gate and scaling a hillside, Savage peered through a broken window with another piece of glass taped over the hole. She decided to enter the house after seeing a shock of blond hair, which turned out to be a wig.
The inside of the home was in disrepair and it was hard to move through the rooms because boxes containing what appeared to be clothes, junk mail and letters formed barriers, Savage said. Eventually, she made her way upstairs and found a room with a small space heater still on.

She was looking at a cordless phone that appeared to have been knocked off its cradle when she first saw the body on the floor, she said. Savage had known Vickers but the remains were unrecognizable, she said.

She remembered her neighbor as an elegant women in a broad straw hat, dressed in white, with flowing blond hair and "a warm smile."

"She kept to herself, had friends and seemed like a very independent spirit," Savage said. "To the end she still got cards and letter from all over the world requesting photos and still wanting to be her friend."

"We've all been crying about this," she said. "Nobody should be left alone like that."

Well that is horribly sad. Don't remember her, but what a horribly lonely way to go. :(

How very sad. May she rest in peace.