The Force Is Strong With Me!

This past weekend, the wife and I went to see the new Ghost Rider movie. Here's my review: it's not a great movie, but I thought it was kinda fun. Great review, right? Anyhoo, in the theater lobby was a huge display for Star Wars: TPM 3D with one of those standee things that you can put your face in. Of course I had to do it. I handed my embarrassed wife my phone and asked her to take a picture. I think it was meant for children, because I had to stoop down to put my face in it and you can see most of my body sticking out. Oh well, it was still awesome! 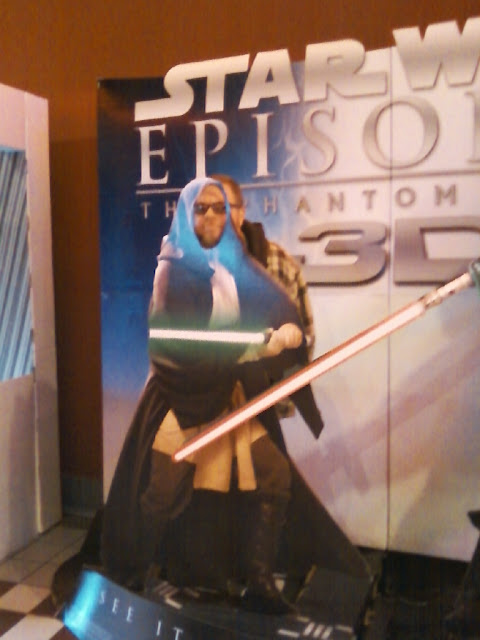 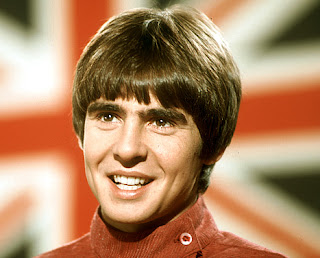 This makes me very sad. He was way too young. My brother and I used to listen to the Monkees all the time when we were young. R.I.P. Davy!

Davy Jones, the mop-topped leader of 1960s pop band The Monkees, died Wednesday of a massive heart attack. Jones was 66.

His publicist, Helen Kensick, said the singer died in Indiantown, Fla., where he lived.

With an infectious smile and easy humor, the diminutive Briton played the Paul McCartney role in the Beatles-inspired quartet, which also included Peter Tosh, Micky Dolenz and Mike Nesmith.

Jones sang lead on some of the group's biggest hits, including Last Train to Clarksville and I'm a Believer.

Jones, who like his bandmates had continued to perform, had dates scheduled for March.

Formed in 1966 by Hollywood producers Bob Rafelson and Bert Schneider, The Monkess quickly stormed radio and TV airwaves with a string of chart-topping songs that went on to sell an estimated 65 million copies worldwide.

"There were certain indelible images we had of The Monkees, and that was Mike's cap, Micky's goofy looks and Davy's cuteness," says Phil Gallo, senior correspondent at Billboard. "Of all of them, Davy's character was the softest. He was the nice guy, the crowd pleaser."

Gallo recalls being a kid in the 1960s, "collecting Batman cards, then graduating to Monkees cards, way before I got into baseball cards. They were the very first boy band, when you think about it."

Jones was born Dec. 30, 1945, in Manchester, England. His long hair and British accent helped him achieve heartthrob status in the United States.

According to The Monkees website, Monkees.com, he left the band in late 1970. In the summer of 1971, he recorded a solo hit Rainy Jane and made a series of appearances on American variety and television shows, including Love American Style and The Brady Bunch.

By the mid-1980s, Jones teamed up Tork, Dolenz and promoter David Fishof for a reunion tour. Their popularity prompted MTV to re-air The Monkees series, introducing the group to a new audience.

In 1989, the group received a star on the Hollywood Walk of Fame. In the late 1990s, the group filmed a special called Hey, Hey, It's the Monkees.

Jones is survived by his wife Jessica and four daughters from previous marriages.
Posted by Erick at 3:15 PM 5 comments:

What better way to celebrate Valentine's Day than with Topps Funny Valentines. Here's a description and pictures from an old Hake's Auction --

"Topps issued its first Funny Valentines set in 1959 followed by a second set in 1960. All cards are 2.5x3.5” with fronts featuring sweet Valentine greeting while backs have a humorous twist. Cards include art by Jack Davis." 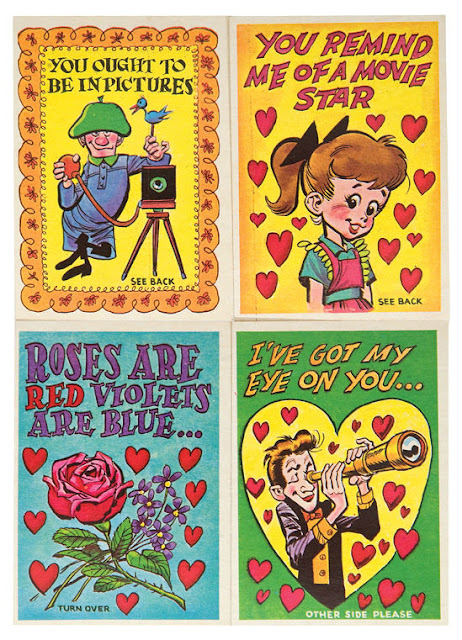 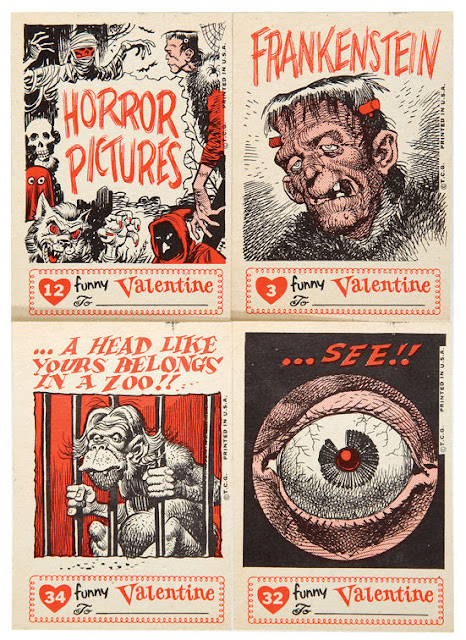 Since 2002 the Rondos have been fandom's only true classic horror award. They are decided by fans, for fans. Every Rondo nominee is being recognized for a significant achievement in the genre during the year of 2011.

Rondo Awards
Posted by Erick at 9:49 AM No comments: