The only monster Super 8 film my dad had in the 70s was Dracula with Bela Lugosi (I still have it). A friend of mine had I Was A Teenage Werewolf. The only other Super 8 in my collection is Son of Frankenstein. 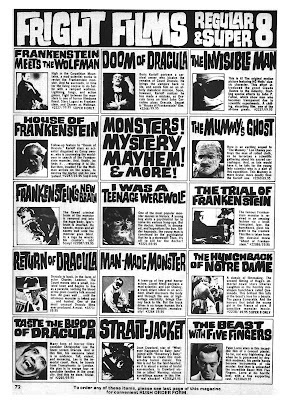 Email ThisBlogThis!Share to TwitterShare to FacebookShare to Pinterest
Labels: monsters

Recognizing the best in monster research, creativity and genre appreciation.

These awards are by fans, for fans. Every Rondo nominee is being recognized for a significant achievement in the genre -- great filmmaking, strong writing, significant scholarship or just plain fun. So please take a look at the ballot and let the nominees know how much we appreciate their work by voting.

Rondo Awards Ballot
Posted by Erick at 12:20 PM No comments: 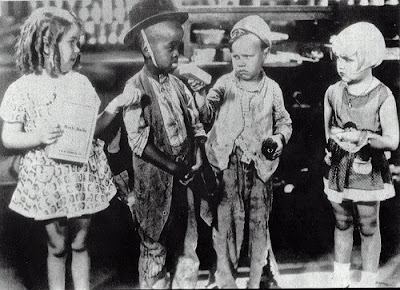 SARATOGA SPRINGS - Shirley Jean Rickert, who starred in five "Our Gang" comedies as a child and later became a burlesque performer, has died at the age of 82.

Rickert appeared in the "Our Gang" films in 1931 with Jackie Cooper and other pre-Spanky and Alfalfa characters, playing a coquettish, Mae West-type character with a short blond bob. She later played Tomboy Taylor in five Mickey McGuire comedies alongside Mickey Rooney in 1933 and 1934.

Rickert - who later went by her married name, Measures - died Friday [Feb. 6] at a nursing home in Saratoga Springs after a long illness, said her daughter, Melody Kennedy.

She had roles in several other films, including "Neath Arizona Skies" with John Wayne and "Singing in the Rain" with Gene Kelly. After her movie career Rickert worked in burlesque in the 1950s as "Gilda and Her Crowning Glory," named for her long blond hair. As Gilda, she performed in theaters and nightclubs across the United States and Canada.

She left burlesque in 1959, going on to work a variety of jobs, including bartender, secretary and sales director for a regional theater in Springfield, Mass. In the mid-70s she launched a career as a traveling industrial hardware saleswoman.

She remained active late in life, performing in local theater productions, helping maintain a Web site for her fans and even doing occasional appearances at film festivals and conventions.

The Many Moods of Romance 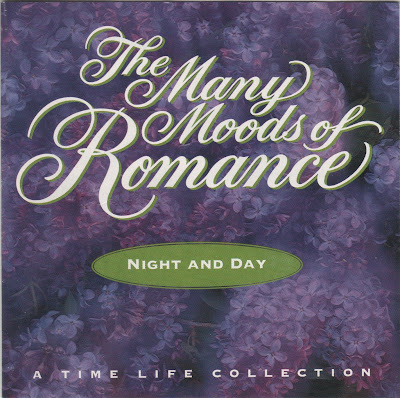 Here's a little something for Valentine's Day. The Many Moods of Romance: Night and Day - A Time Life Collection.

I sure hope all of Forry's stuff finds a good home. It would be cool if it could all be put in some sort of monster/sci-fi museum.

LOS ANGELES (AP) — He always vowed that he wouldn't die unless he could take it with him.

But now that Forrest J Ackerman really is gone, the grand old man of science fiction's memorabilia collection is on the auction block.

Thousands of items, including the Count Dracula ring worn by Bela Lugosi

in the 1931 horror classic "Dracula

," the vampire cape Lugosi wore for decades — even the actor's outfit from the "worst film ever made," Ed Wood

So are such notable pieces as a signed, first-edition copy of Mary Shelley's novel "Frankenstein

" and a first-edition copy of Bram Stoker's "Dracula

" that was signed not only by Stoker but also Lugosi, Boris Karloff

and numerous other horror film notables.

The auction, tentatively scheduled for the last week of April, is expected to raise $500,000, said Joe Maddalena, president of Profiles in History, which is handling the sale.

Ackerman, the science-fiction writer, editor and literary agent widely credited with coining the term sci-fi, spent a lifetime collecting tens of thousands of pieces, ranging from the junky to the very rare. He died last December at age 92.

"I'm holding that stuff in my hand and I'm just like, 'Wow, these are his most iconic treasurers,'" Maddalena said when he was invited by Ackerman's estate to auction the collection. He said Ackerman's will stipulates that his estate's share of the profits be divided among his friends.

At one time Ackerman had a collection of 300,000 pieces of science-fiction film memorabilia, 50,000 books and the complete sets of 200 science-fiction magazines. During his final years he contributed many pieces to museums and sold some others, but held on to thousands more. 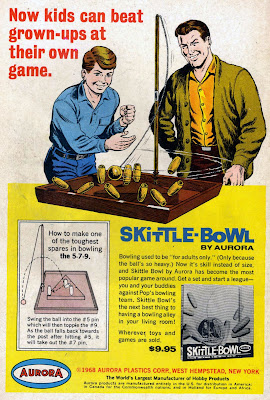 My brother sent me this scan of an ad from an old comic book. Skittle-Bowl by Aurora. We had this game in the early 70s. I don't remember playing it a lot, but I think the ball and chain on a stick was used more as a weapon! Anybody else have one of these?
Posted by Erick at 2:24 PM 3 comments:


This song combines two of my favorite things -- KISS and The Steelers! 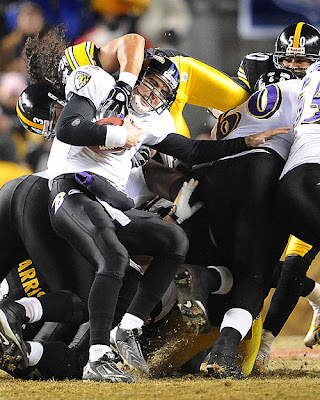